To Pinpoint On The Fly is a metal detecting skill you need to master early on as it will save you loads of time and effort. The advantage of pinpointing accurately is that you will dig smaller holes and find your targets faster, leaving you with more time to detect and less time digging huge holes.

When you hit up a good target swing slowly over the target. Keep your metal detector level and as close to the ground as possible as you sweep to your left and right repeatedly in a straight line.

Step 1
You are going to create an invisible “X marks the spot” and this is the first line of the X. Your detector will ping each time the coil passes over the target. Reduce the length of your swing to about 20cm left and right, and wobble your detector over the target until it is constantly pinging above the target.

You will soon get a feel as to where the target is under the centre of your coil along this first line of the X. You can mark this spot by scuffing the soil with the point of your shoe as a reference for the next step.

Step 2
At this point turn your body 90 degrees and do the same. Swing low and slow from left to right over the scuff mark you made in the previous step where your detecting was pinging.

You are now creating the second line of the X that marks the spot. Reduce the length of your swing to about 20cm left and right, until your detector is constantly pinging above the target. This tight rapid swinging action over the target while pinpointing is called The Wobble.

The centre of the coil is where you need to make your next mark, your second line of X marks the spot. 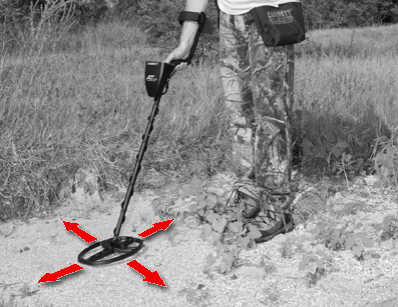 Where these two imaginary lines intersect is where your target is at, and X marks the spot

You will slowly get the hang of it and as they say, practice makes perfect. Each make and model of detector behaves slightly differently and you will soon learn where to pinpoint targets accurately under your particular coil.

Most of the newer model metal detectors come standard with a Pinpointing mode which makes the pinpointing technique as explained above a bit easier. You will follow the same steps as above, but use the pinpoint feature to mark the exact spot directly under the coil.

Pinpointing with the Garrett AT Max Pinpointing with the Minelab Equinox 800

The Minelab Equinox 800 when in pinpointing mode makes a continuous beep increasing in intensity and volume as you hover the coil over the target. In addition to the audio cue, there is a very nice visual reference on the display where a partial or full circle on the discrimination scale indicates when over the target. When the circle is fully closed and the sound at its most intense is when the target is under the centre of the coil. Actually, with the Equinox 800, the target is under the part of the coil indicated by the EQX11 marking.

Metal detecting is a hobby for the family. The Nokta Makro Mini/Midi Hoard detector for kids and Simplex+ for adults are ideal metal detectors to get started.

We unpack the differences between a Gold Detector and Metal Detector. We take a look at the various frequencies in use by popular Metal and Gold Detectors.

When choosing a fishing magnet there are a few factors to consider such as a single or double-sided magnet. Read our blog to learn more about magnet fishing.

With metal detecting being so popular many of the obvious places have already been hunted. Read our blog to find out where to metal detect in South Africa.